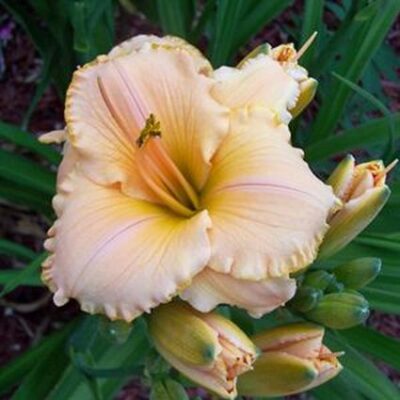 As the name implies, this daylily literally glows in the sun! This is an excellent rebloomer that provides a long season of color.

‘ Spanish Glow’ is one of the best daylilies on the market for flower power.

Each scape is well branched with over 40 buds!’ Spanish Glow’ is considered a ” Designer” daylily because it has been selected as a highly performing plant with exceptional bloom performance, substantive, vibrantly colored flowers, complete winter hardiness in northern zones, and a vigorous habit.

Daylilies will grow in almost any soil and prefer full sun.

Use for mass plantings, edging, in borders or in mixed containers and tubs.

Planted together in large numbers, they quickly crowd out weeds and make a carefree and colorful ground cover.

Daylilies can survive many harsh conditions that other plants cannot.

This includes polluted city environments, slopes, poor and dry soils, near pavement that is salted in winter, and under Black Walnut trees (not affected by juglone).

It is heavily budded, shows off its warm peach color, and will rebloom later in the season to give you a repeat performance!
* Prolific Ruffled Peach Blooms
* Rebloomer
* Grows Nearly Anywhere